The Canadian educator Ted Aoki wrote about a “bridge that is not a bridge.” We use bridge as a verb, moving us ahead to make the world a better, more just and democratic place. In this sense, bridge becomes a metaphor. There is no actual structure and experience to guide us through challenges we face.

John Lewis wrote a book called Across that Bridge: A Vision of Change and the Future of America. Again, I propose his bridge is not a physical structure either. But, physical bridge provides insight into myriad emotions at play as transformational change happens. In these moments, we put faith and trust in others and things we cannot see, only hope for. We reach out to hold each others hands, understanding the shared meaning of (com)passion. In these moments we share (com-) the joy and suffering (passion) of one another.

Today, as I prepared to post, I came across this poem and accompanying picture. For many, this bridge is not daunting. For me, fear is front and centre as I cross. When we crossed this bridge, I reminded myself to take it one step at a time. Transformational change counts on us taking it one step at a time, as we share journeys with one another. We will each experience loss and gain in different ways. At the end of it, what we share is being human and becoming more human with each ensuing step.

Standing on the edge,

Reaching out to others.

Taking the next first step,

And, others in the human journey. 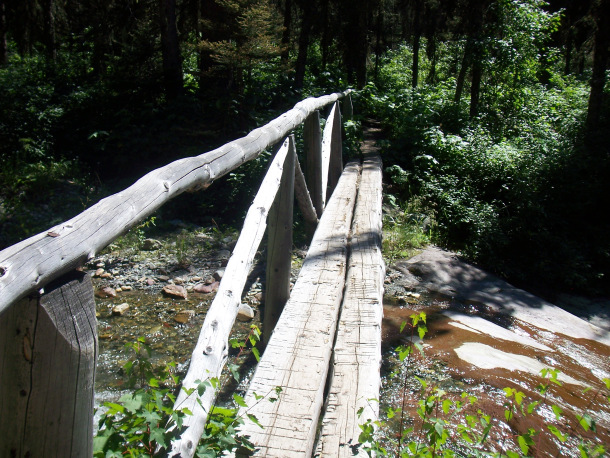 The Difference Between Judging and Discerning

Source: The Difference Between Judging and Discerning

I am on the road for a couple of days, so I am not sure what I can post in terms of original material. I turn to pressing some great posts from others.

Val‘s post resonated with me, because judging and discerning were part of my dissertation. Hans-Georg Gadamer used these concepts in Truth and Method and they formed a significant part of my conceptual framework, literature review, and conclusions.

Gadamer proposed humans judge the world, ideas, and people as they encounter them. He used the term prejudice, which is a way of prejudging the world as we engage with it and others. In effect, there is a right or wrong way to engage. I used parentheses, because it has a negative connotation and to slow the pace of reading. It became (pre)judge and (pre)judice, which annoyed two of my committee members.

When we take more time to read text and (con)text, that which encircles us, we can (dis)cern and (in)form ourselves as we realize the world and people are complex. WE ask eloquent questions that do not have predetermined answers. We let the question frame dialogue with the world and others.

Val said “when we detach [ourselves] from the belief of good or bad, and discern life’s multicolors and shades, we find freedom beyond the rules and conditioning of the mind.” We let go of judgements of a world that is cast in binary choices of black or white, moving to complex (con)textual understandings (sub)ject to discerning and seeking new and continuous understandings. Ted Aoki contended “and” means more than the binary nature of “or.”

Through the concept of deconstruction, the philosopher Jacques Derrida argued we do not live in a world of binaries. Derrida contended between words that appeared to be opposites there was no space and they appeared as long/short. One cannot think of long without understanding short.

Lao Tzu made a similar argument in the first part of this poem: “is and is not produce one another.” Ted Aoki, who was an Alberta-based educator, described the essence of things as being embedded in their “isness.” In the second part, Lao Tzu spoke about a teacher being a person who teaches without a need to possess the words he/she speaks and receiving merit for their teaching.

While I was journaling this morning, I thought of teaching’s essential nature, which is less about the words we speak as teachers and the way we comport ourselves.

As a Frenchman, Derrida used the proper to describe how one comports themself. A person can have rhetoric to fool people, but they do not possess good character if their actions are improper and incongruent with their “good speech.” A person of good character is mindful of the words they use and how they sometimes betray their character.

Beauty and ugliness have one origin.

Name beauty, and ugliness is.

Is and is not produce one another.

The difficult is born in the easy,

long is defined by short, the high by the low.

Instrument and voice achieve one harmony.

Before and after have places.

That is why the sage can act without effort

and teach without words,

nurture things without possessing them,

and accomplish things without expecting merit:

only one who makes no attempt to possess it

Initiation Song from the Finders Lodge

I did not realize Ursula LeGuin wrote poetry I knew she wrote prose and the poetry was a pleasant surprise.

Besides the last line about always coming home, two other lines stood out. The first was letting my fingertips be my maps. This suggested being in touch with the world I live in; feeling it in a visceral way. When I close my eyes, the world reaches into me through my body. In there, the world lives in my soul which is house which is not a house. That feels Zen-like.

Ted Aoki wrote about bridges which were not bridges. Teachers invite students into learning. In those spaces, anything happens and teachers intuit their way around.

Please bring strange things.
Please come bringing new things.
Let very old things come into your hands.
Let what you do not know come into your eyes.
Let desert sand harden your feet.
Let the arch of your feet be the mountains.
Let the paths of your fingertips be your maps
and the ways you go be the lines on your palms.
Let there be deep snow in your inbreathing
and your outbreath be the shining of ice.
May your mouth contain the shapes of strange words.
May you smell food cooking you have not eaten.
May the spring of a foreign river be your navel.
May your soul be at home where there are no houses.
Walk carefully, well-loved one,
walk mindfully, well-loved one,
walk fearlessly, well-loved one.
Return with us, return to us,
be always coming home.

Sweet is the Oneness

I just finished writing the first draft of a short paper on complexity and the teacher’s practice. Much of this is not new. A classroom has the potential to become a community. It is about the needs of each student within a classroom and their personal lived histories. Around that community has the potential to emerge. I cannot plan for it. I can wish for it. Community grows out of the livingness of our lives when we linger on bridges that link us and we while away time in those moments. This is different then when someone chooses a team with a specific goal in mind.

Those are not my thoughts. I added to the thinking of Hans-Georg Gadamer, Max van Manen, David Jardine, and Ted Aoki. I found  complexity is something we have talked about throughout history, yet we it treat like it is new. I looked for a poem that fit my writing. The first poet that appeared was Rumi and he led me to this beautiful poem about the oneness of community.

If ten lamps are in one place,

each differs in form from another;

yet you can’t distinguish whose radiance is whose when you focus on the light.

In the field of spirit there is no division; no individuals exist.

Sweet is the oneness of the Friend with His friends.

Help this headstrong self disintegrate;

that beneath it you may discover unity,