I wrote this poem when I was in high school, so some 50 years ago about the time I wrote Angry Young Poet. I updated both poems several years ago, but the underlying theme was evident in the orginals and I tried to keep that in mind in editing.

I found both poems as part of handwritten notes I dug through one weeked while Kathy was away. What struck me was how little things change. In fact, I might argue things are more entrenched than ever; the rich got richer and the poor poorer. One only has to consider the enormous wealth being accumlated by billionaires during the multiple crises we are experiencing.

Multiple crises, health, economic, and social justice, might give us room to re-imagine the world we want for our children and grandchildren. Instead, I am afraid we are more entrenched in our binary positions. Despite this, I hold out hope, not optimism and positivity, that we can begin the process of transforming the world to make it more democratic, socially just, and equitable. Part of my writing is revisiting an article I published in 2012 called Rocky River: Building a Learning Organization to re-imagine how we might educate children, youth, and adults. I begin re-imagining with a simple shift in language and call those engaged in teaching and learning educands a word Paulo Freire used in Pedagogy of Hope: Revisiting Pedagogy of the Oppressed.

More broadly, we can apply the learning organization’s principles to other institutions. Peter Senge cautioned it is hard work and takes time. Unlike other revolutionaries, Freire stated incremental change, based on dialogue between humans, was essential to transforming the world. Although Senge does not draw on Freire’s dialogic model, he suggests dialogue, with deep and caring listening, is at the heart of transforming institutions.

They know best for the rest–

Who are we to question?

Depending them to know best.

Failing to practice what preach.

I re-worded the poem again. I see how little changed in 50 years. Without a picture, I thought of which blues musician might best convey my message. I immediately thought of Nina Simone, who sings with edge. When I play her songs for undergrads, those with backgrounds of privilege demonstrate a visible level of discomfort.

From “The Rock Will Wear Away”

During the Pleistocene Era between 12, 000 and 17, ooo years, a glacier dropped the big rock in what is now prairie just below the foothills and Rocky Mountains. There are two rocks and on the flat of the prairie they seem erratic and out-of-place. The size of the rocks speaks to the power of nature.

I have a question about this rock. How big was it when the glacier dropped it in its place?

Holly Near is a singer-songwriter. The following is a short excerpt from one of her songs. As she proposes, the rock appears stronger than water. But, is it?

Humans and water are resilient, they come back time and again. Our fragility makes us vulnerable, but, at the same time, provides durability. Like water slowly eroding a large rock down into smaller and smaller bits, humans, through their mindful and collective efforts, can bring about dramatic change to the world.

Can we be like drops of water falling on the stone

Weaker than the stone by far but be aware

That as time goes by the rock will wear away

And the water comes again 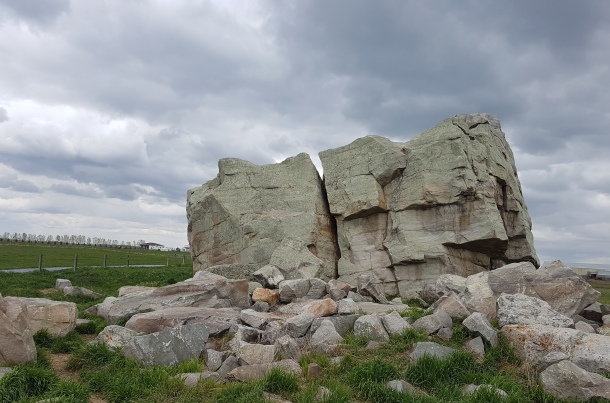