We are back from day 2 of our Waterton Lakes National Park adventures. Yesterday, I commented on International Peace Park that within reason animals are right there and pose for you.  We were unable to post our one bear sighting. Despite poor vision, bears hear very well our sighting was from the boat. As we moved closer, the bear heard us and headed for cover. We only took pictures of his rear end from a distance. Today we had two bear sightings.

This was our first sighting. This bear was about 100 metres away on a hillside as we left town. It is a fair-sized and is brown, but is likely a black bear and not a grizzly. What we could see of the snout and head does not look quite right and it is missing the hump on the back. Here is another view.

Grizzly bear are generally solitary and do not like humans around them where black bear are more likely to approach areas with humans around.

This sign is at the Cameron Lake trail and refers to the area beyond as a ‘grizzly’s garden’ and care is needed beyond this point.

Here is a haiku for grizzly bear we did not see, but we know is out there.

Our good fortune was not done. We spotted another black bear on another hillside on our way back from Red Rock Canyon. This one is younger and smaller and is definitely a black bear. I would guess it was born a year ago this past spring.

You can see the snout and the ‘piggy eyes’ of the bear. They are members of the same family as the pig. The ears stick up more and the grizzly would have ears that are ‘teddy bear like’ and stick out from the side of a very large head. 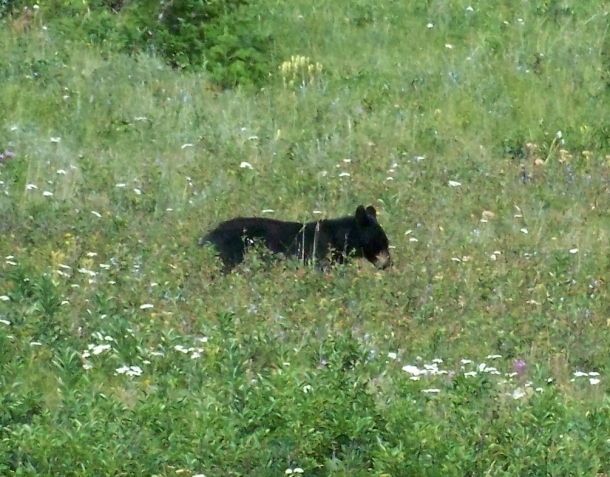 Not all animals we met were as intimidating. 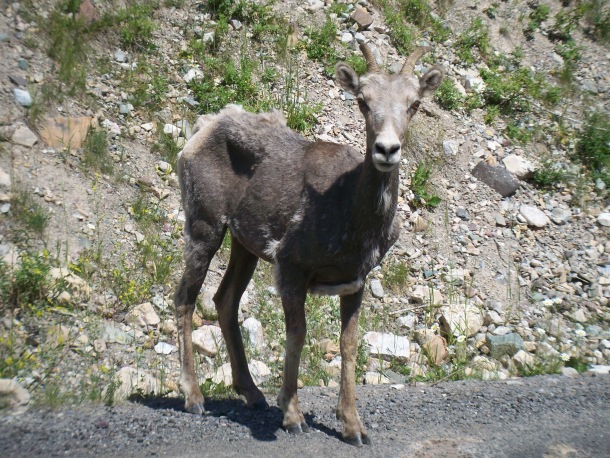 This sheep was about 2 metres from the car and just looked up to have its picture taken.