Kathy and I are in Jasper for a couple of days. It was a great way to spend the Sabbath.

I find it deceptively spectacular here. In Waterton, did a lot in three days, but here you have to choose; there are so many places to go. It is a larger park with a much longer connected set of trails. 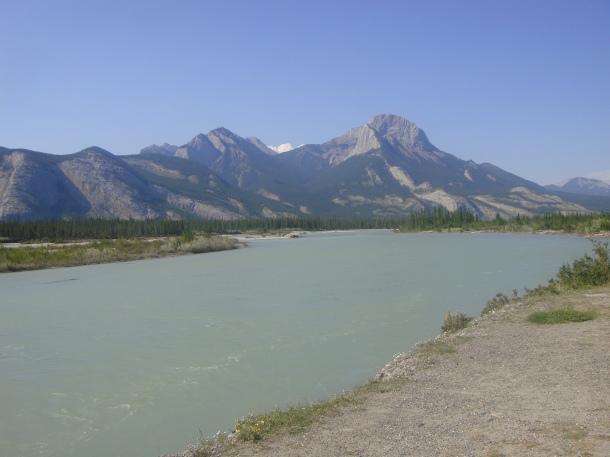 We took the first pictures a few kilometres inside the park. This is looking east and downstream on the Athabasca River. The Athabasca originates at the foot of the Columbia Icefield. It joins the Peace River and forms the Slave River, which flows into the Great Slave Lake where the Mackenzie River discharges and flows to the Arctic Ocean. From the source of the Athabasca a drop of water flows about 6200 km. 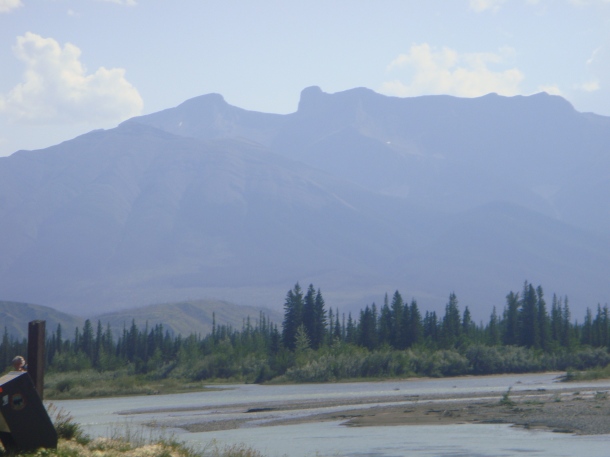 This is an upstream view of the Athabasca River. What looks like a ‘saddle’ on the mountain in the middle, is actually two mountain peaks. As we drove closer to town, the angle shifted and the distinct shape of both mountains became visible. Further upstream, people wade a 100 metres out into the river and, depending on snow melt, there is sometimes only the main channel of the river. Today, it is running high.

We don’t stop very often for mountain sheep. They are fairly common along the roadside, but we don’t often get an opportunity for a picture of a ewe and lamb.

We don’t often get this chance either. It appeared as though the little ones were learning climbing skills. This one stopped and posed; looking straight into the camera.

Mount Edith Cavell is a prominent feature in the Park. It is visible from a variety of locations and has many hiking trails. Park officials closed the mountain to hiking due to a recent ‘avalanche.’ The dark spot between the two large white areas was a large block of glacier which recently collapsed. We took the picture on Highway 93 (Icefields Parkway) which is the highway to Banff.

This is Mount Kerkeslin which is on the opposite side of the Highway 93. We took this picture later in the day with shadows and it had become overcast with rain showers popping in and out of the area.

These are some palisades that tower over the valley a little further south of Mount Kerkeslin.

Today, we are off to do some hiking and sightseeing in Maligne Canyon and the Valley Five Lakes Loop.

Posted in Nature in All Its Glory, Photography, Uncategorized and tagged Jasper National Park, nature, Rocky Mountains, teacher as transformer. Bookmark the permalink.
%d bloggers like this: