Another Day in Paradise

It was a less eventful day today with no bear sightings. We saw some deer late in the day, but they were in a hurry to get somewhere so did stop for pictures. What I have are some pictures of the natural beauty of Waterton Lakes National Park.

As we drove south from Pincher Creek, this is the view of the mountains before a person drives into them. The sign says, “Where prairie meets the mountains” and they do.

This was a similar view, without the bales, later the same day just before sunset.

And, if you give it a few minutes, this is what it looks like.

The sky in peaceful fury

This is the view from the beach at the town site of Mount Vimy. Can you imagine waking up to this every day? It would be pretty intense, but 88 people do everyday. According to Stats Can that is the official year round population of Waterton.

This is a view from the boat of the approach to the American side of Waterton Lake. 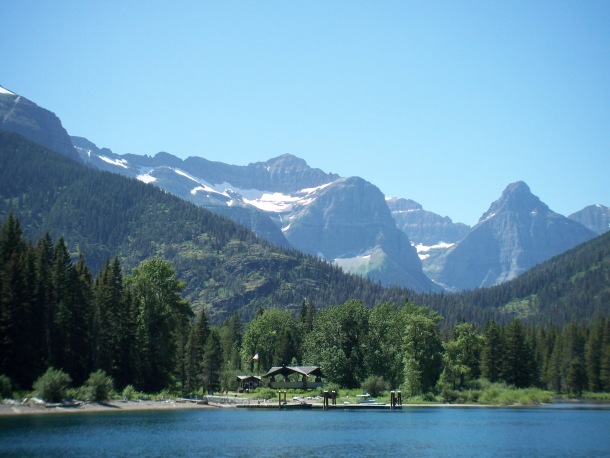 This is at Kootenai Lake which was at the end of our hike into Glacier National. The ramparts are spectacular.

Rise above it all

We feel safe below.

This is across Kootenai Lake. We waited but the moose did not show himself. He was there five minutes before we arrived.

At the end of the day, just before we left the town site, the moon appeared above Vimy.

Keep us safe til morn.

Have a great August 1.

The Internet is slow particularly when uploading images. I may need to wait until tomorrow morning and post early before we head off for the day. In the meantime, I jotted this as we walked to Kootenai Lake.

Teases with hide and seek

Beaver away from lake house

Insects whir in the stillness

I am not sure

Seamless, yet not form fitting.