This is a new poem. I started working with another, which I will post later and this emerged.

What happens is contemplative exercises allow me to become mindful as I move back into my daily life. These activities can be meditation/prayer, time to walk, reading poetry, etc. What I experience moments remains with me.

I embed activities into my daily routine. For example, I try to get out and walk each day. I note what and who I see, hear, smell, and feel. The other day, I observed autumn’s musty smell had arrived, as trees shed their leaves. We have had little rain the last few weeks, but some drizzles may have hastened the smell of decomposing materials.

When we travel, we spend time walking and hiking in and out. I love waterfalls and mountains, so they speak to me and linger with me, forever changing me.

Shobna provides a short and powerful message of how each of us can achieve peace.

The Thich Nhat Hanh quote she uses summarizes a message about the source of strength.

The word heart is related to many other words: health, hearth, and courage. Each word points to an inner journey we make to discover peace; to the heart and core (another word related to heart) of each of our strength.

I find nature is a space of solitude where peace emerges during long walks and listening to nature’s soft sounds. It is not that the busyness of the world is in some distant place. Instead, it is often just around the corner and nature offers a temporary sheltering space and reprieve to gather one’s self; a calm in the storm life can become. I added the following quote:

“We have to walk in a way that we only print peace and serenity on the Earth. Walk as if you are kissing the Earth with your feet.” (Thich Nhat Hanh)

This is my favourite picture taken in the upper reaches of the Fraser River with Kathy standing on the rock. Just beyond her, the river narrows, forming rapids and Rearguard Falls, hinted at in this picture. From where we stood, we heard the river’s noise, chaos, and power as it traversed its narrowing chute (the French word for waterfalls).

Granted, it is chaos to me. Nature embraces what I consider chaos.

This images and video caught my eye, as I love waterfalls. I am in Spokane for a few days and only a few minutes walk from Spokane Falls. Below, I include videos (apologies for the grainy nature) I took of the falls on my walk the other day. I am struck by how nature surrounds and engulfs me.

Humans are part of nature. I experience this inness, if there is such a word, as rabbits, deer, coyotes, etc. inhabit the neighbourhood we live in. 20 years ago, I may have argued we were on the outskirts of Edmonton, but today that is not the case.

Despite the urban sprawl we experience, nature does not recognize boundaries the way we do. Boundaries exist in nature, but they are formed around natural structures e.g., mountain ranges, valleys, rivers, etc.

The second video is just above the first set of falls and shows part of the skyline and the site for Expo 74.

via ….and Mary Oliver spoke

Udo posted this quote from Mary Oliver‘s poem, The Summer Day. It is my favourite line from all of her wonderful poetry and challenges me to reflect on and act on the purpose and calling of my life’s vocation.

Mary Oliver reminds me life and its many callings are not filled with certainty and fixed paths. Instead, I wander and wonder as I take detours and hope I find my way.

I share this line teaching and presenting, as a reminder life is about unexpected and, sometimes, we have to permit ourselves to stop and experience what we often drive by and take-for-granted. 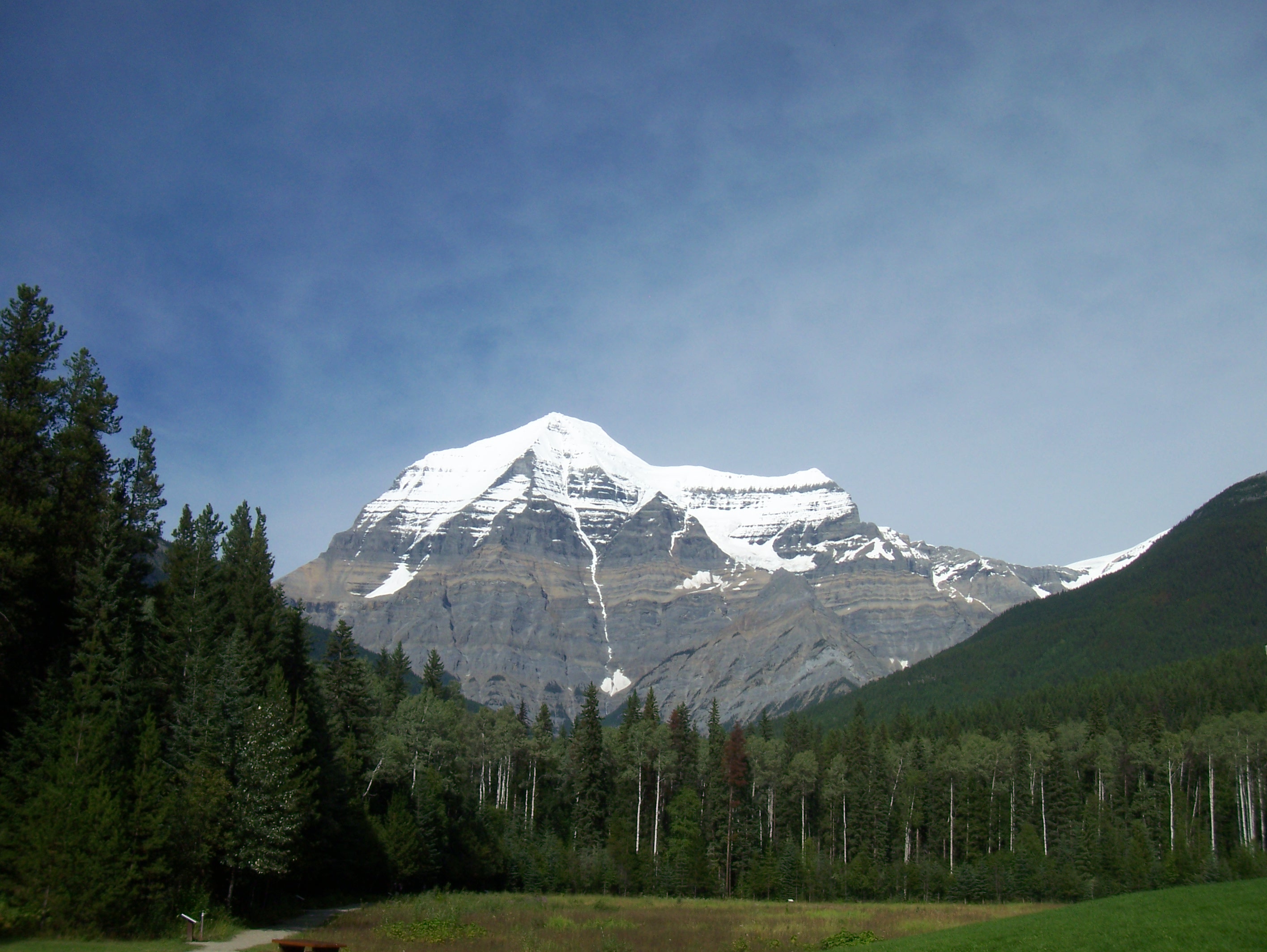 On trips to visit in British Columbia, Mt. Robson is a favourite stopping place. The mountain is a sentinal over the valley, with wilderness gems to experience and revel in as I live my one and wild life.

The waterfalls are located in the Crowsnest Pass. Like Mt. Robson, I gave myself permission to pause and experience being in nature and not just a visitor.

I am fascinated by waterfalls. It could be they offer paradox in their fury and the stillness found in their sources or in the pools that lay at the base of the falls. Glacier National Park offered opportunities to see waterfalls up close and from a distance

I want to give perspective on driving through the pass. This is common with even more pronounced switchbacks in places. I can look out of the car window when there is vegetation along the side of the road, but my fear of heights is paralyzing. I don’t drive these roads. Kathy was a mountain goat in an earlier life and is far more comfortable with this driving.

We walked in to Running Eagle Falls or Trick Falls. Earlier in the summer and spring, there are two waterfalls caused by spring run off from the snow melt. I copied a picture, which shows the second waterfall above the one in our picture. The link I used rated these falls among the top in the Pacific Northwest.

We hiked into Avalanche Lake. We took pictures from both ends of the lake. The first picture shows a series of waterfalls coming down from the mountain side. The snow on the mountains is actually in the form of glaciers. 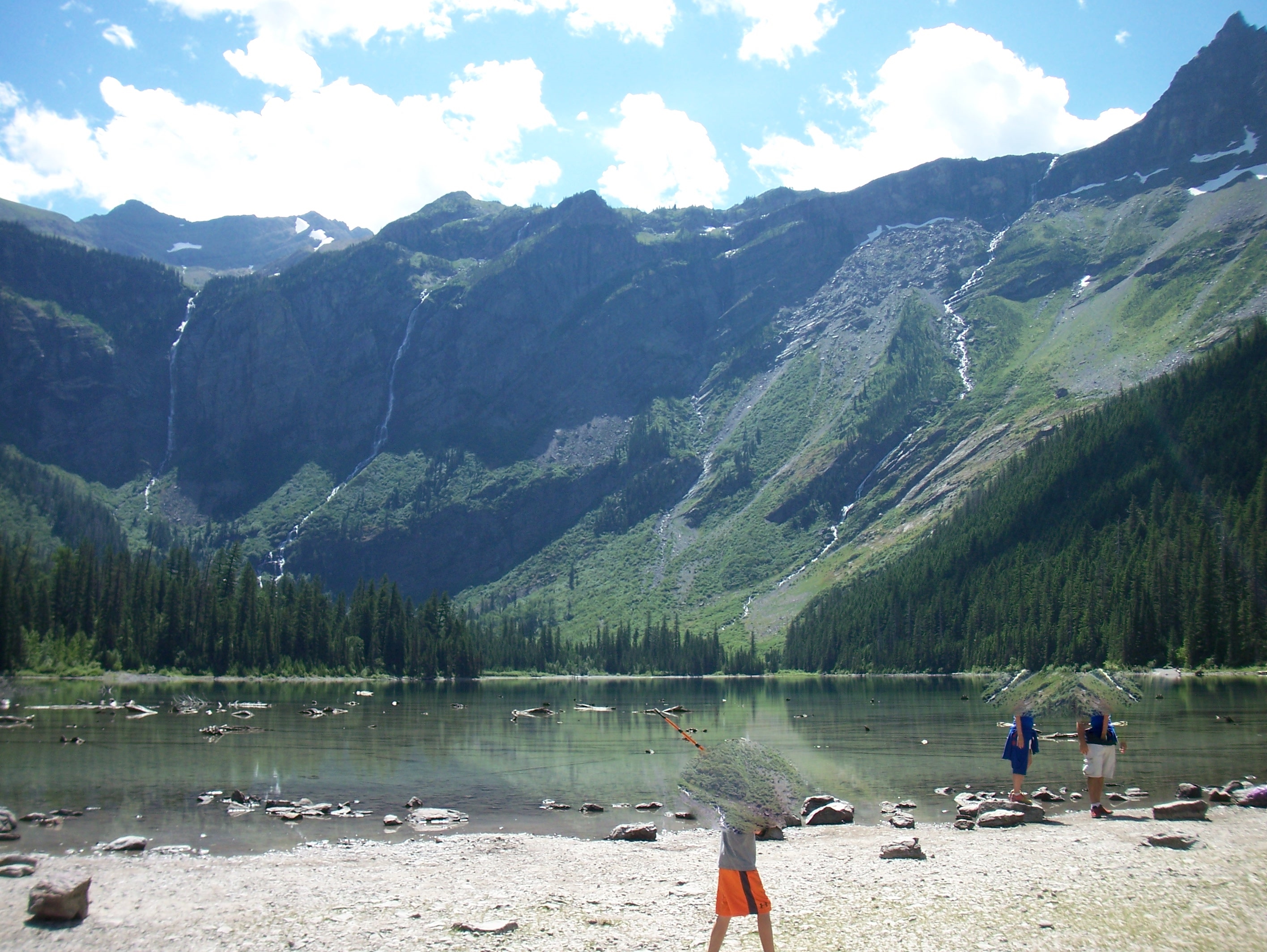 We hiked around the lake and were able to take a few more pictures. Another hiker told us he tried to get closer, but once he was a few feet into the trees he said it was impassable. You can see in this picture that it does not look far but the underbrush is heavy. The link to Avalanche Lake has some pictures taken by someone who was able to get closer to the base of at least one of the waterfalls. As we got closer, the waterfalls look quite different with more ribbons appearing. 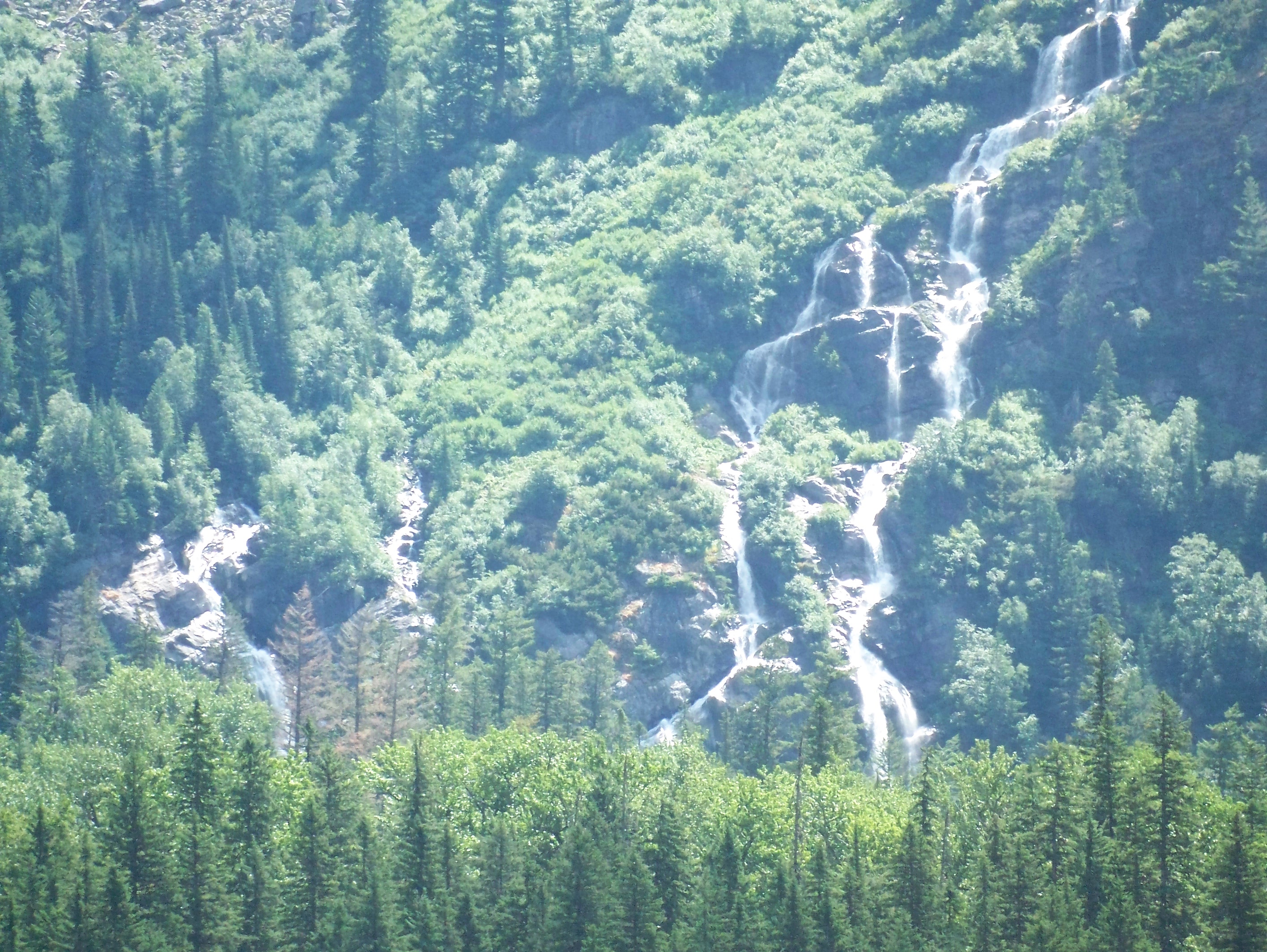 We were furthest from this waterfall, but the ribbons were clearer as we got closer.

I took two pictures in Logan’s Pass. This was one. Once we got to the top of the pass, it was less open and I was able to manage a camera shot. It was right beside the highway. I rolled the window down, as there was no parking and took this picture. 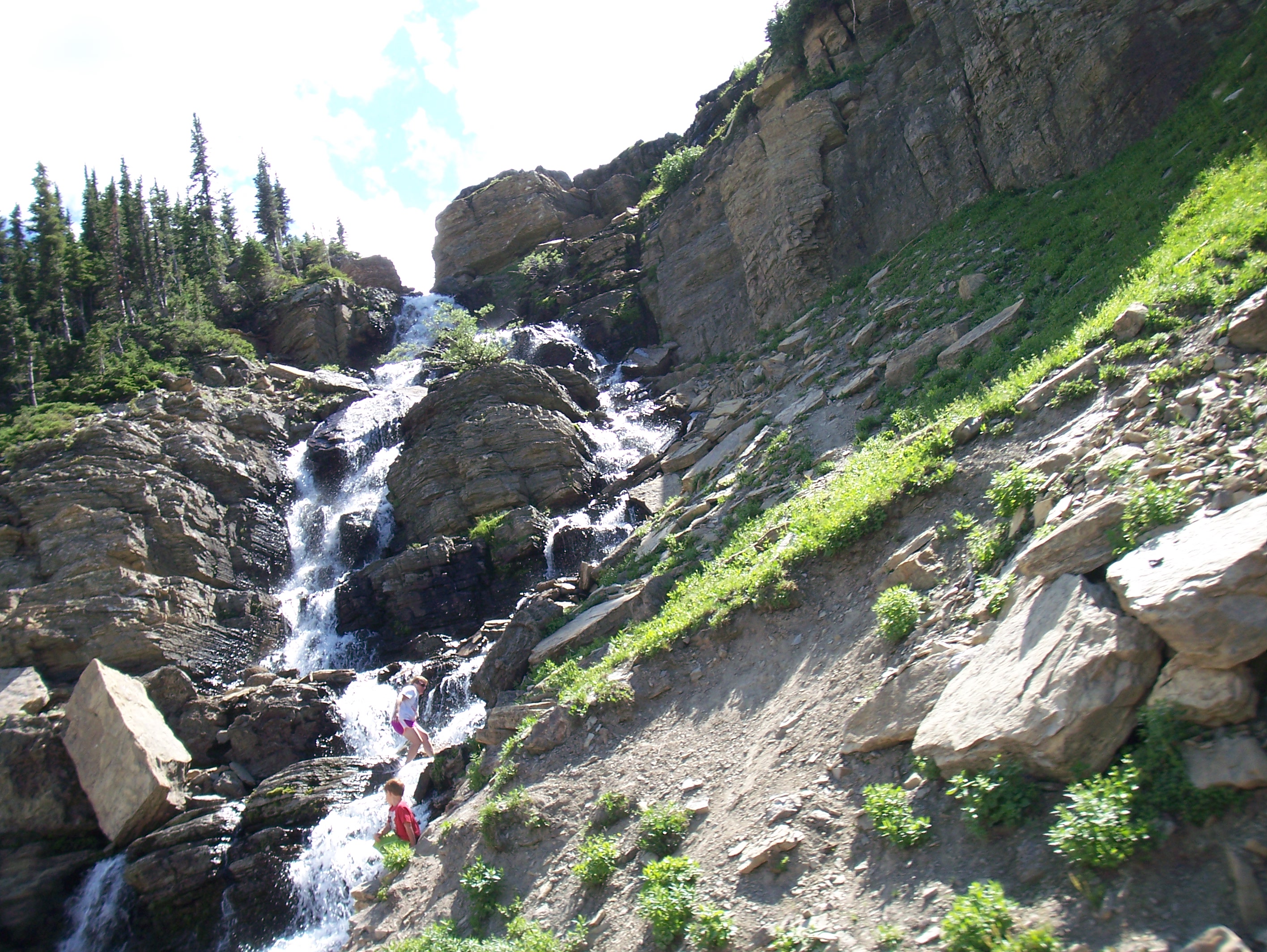 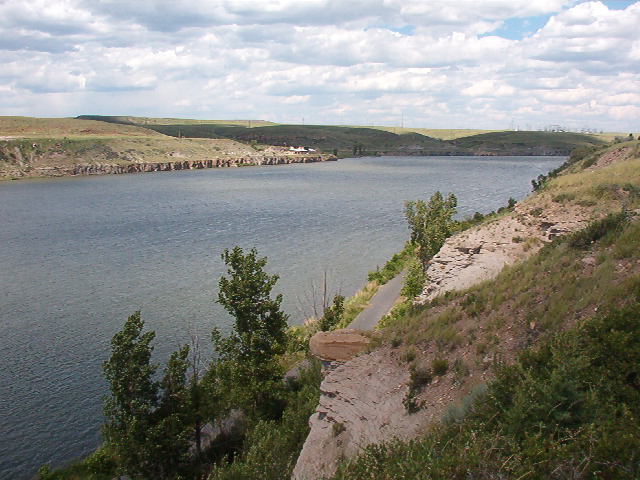